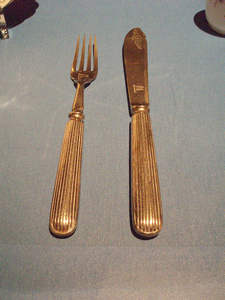 It's been too long since I posted a vignette, so it's time to start "just post it!"ing. I wrote this in the context of a discussion of how to depict the passage of time.

He was too late to catch the tastysquirrels in their nighttime hibernation; by the time he reached the grove, the sun was up and the squirrels were chasing one another up and down the trees. He sat in a not-too-damp patch of leaves and watched them scamper, then amble, then settle into un-defended furry sleeping heaps as the midday heat took hold.

Venturing from his hiding place, he was dumbfounded to learn that John was right; the colony of squirrels slept on when he grabbed several by the scruff of the neck and tossed them into his basket. Even the captives just keened irritably and curled up again in the wicker, resuming their tiny snores. "Like windfall apples with fur," he murmured as he headed home with his harvest, wondering if he had any panko crumbs in the pantry.

Image: Wikimedia Commons
Posted by Martha at 10:59 AM