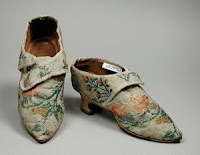 So, my sewing plans tend to be over-ambitious. When I cut the altered (shoulders narrowed, sleeves shortened) Sewing Workshop Liberty Shirt out of some medium-weight black linen, I had fancy plans for it. The linen is too heavy for the French seams that the pattern instructions call for, so I was going to do a Hong Kong seam finish with bias strips of black chiffon. And I was going to line or interline the sleeves to make them nice and slick, to make the shirt suitable as a jacket. I even considered a full bagged lining, not that I know how.

Then it was six (or so) weeks later and today I decided to just sew it up. I followed the very fine instructions for the mitered hem, and argued the sleeves into the armhole (it took two rounds of "staystitch plus"). I did ordinary seams, finishing them with the fake serger-like stitch on my sewing machine. I pressed, I did buttonholes, I sewed in glossy little shell buttons, and yay! It's ready to wear tomorrow.

That doesn't eliminate my fancy plans; they've just moved to other garments. I have extra elaborate intentions for a garment involving silk brocade piped with silk charmeuse, but before I go that far I think that I'll try handkerchief linen piped with... well, something. Something gaudy. I still crave the whacky.