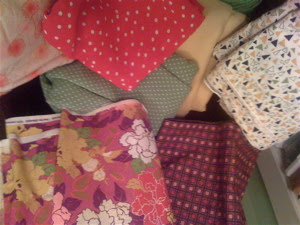 The above depicts most of my fabric purchases since the sewing restart. Maybe aliens have stolen my brain?

The below shows the pink silk cowlneck blouse, my first wearable garment since the sewing restart. You may observe that while I'm willing to admit that I don't actually have feathers and a beak, I'm not yet prepared to show my actual face on the Internet. 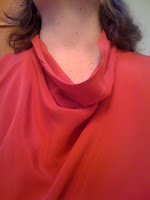 I've mentioned before that somewhere in my brain is the conviction that I'm wildly unattractive. The conviction that if I demonstrate that I've put any effort whatsoever toward my appearance, small children will point and laugh. I've used the phrase "pig in an Easter bonnet" in reference to the idea. I'm not sure where all that came from--though I have theories--but it's definitely in there.

I suspect that that's part of why my initial entrance into the world of girly was through perfume. Perfume's appeal does not depend, in any way, on me. Whether I'm beautiful or hideously ugly, perfume will smell the way it smells. I don't categorize it as an ornament, and therefore to wear it, I don't have to feel that I'm worth ornamenting. It's the opposite extreme from makeup, which to me is all ornament, a statement that communicates my belief that I can be made worth looking at. That brings us back to point-and-laugh.

Clothes are somewhere in the middle. Everyone has to wear clothes, so unlike perfume, the mere fact that I'm wearing some doesn't indicate that I have the unmitigated gall to have any faith in my appearance. Even fine, expensive clothes, as long as they're boring, can communicate not respect for my appearance, but respect for those who have to look at me. Now, I combine my belief that I'm ugly with a rebellious anger at the world that (according to the crazy part of my brain) thinks I'm ugly, so I don't actually do the fine expensive clothes, but they don't make me fear point-and-laugh. In my mind, people seeing me in those expensive clothes would respond with something along the lines of, "Well, at least she made some effort, but sheesh. Couldn't she just stay home?"

But, see that stuff in the photo? The stuff that, if your monitor color is like mine, looks like it's pink with white polka dots? It's actually red with white polka dots. Bright red. Fire-engine red. Red. A woman wearing fire-engine red with polka dots is ornamenting herself. I bought that fabric, and I intend to make it up using the same pattern that I used for the pink blouse, and I intend to wear it. In public.

This is a change. I must say that it's not a change that comes from a new place of peace and happiness in my mind; in fact, it's coming out at a time when, as I keep saying, I'm doing a whole lot of worrying. And maybe that's the motivation; maybe I'm finally ready to tell those worries that they can clamor all they want, and I can't ensure that they won't come true, but I'm going to focus on joy in my life anyway. Maybe I've hit just the right level of fed up, with my brain and with anyone who might happen to turn out to behave in accordance with my brain's prediction of how the world will behave.

I'm going to wear polka dots. And that, I hope, is just the beginning.
Posted by Martha at 4:09 PM