Blogging: From Rant to Recruitment 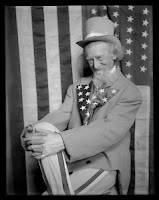 Remember this post, about the sorry state of discussion of blogging? (As opposed to discussion of SEO and pay per click and AdSense and other blogging-for-profit topics?) Remember the forum that I thought was permanently drowned by backlink spammers?

Well, I'm not really withdrawing that diagnosis, but the site owner is taking the idea of a subforum about nonprofit blogging seriously. So rather than wait around for that subforum to get created, I thought I'd make an attempt at starting some actual discussion of blogging on the existing forums over there.

So I posted two posts, both of which, if you were to read them, might strike you as somewhat familiar, because much of the text has appeared on this blog. I'm self-plagarizing because, frankly, it's hard for me to wholeheartedly write something brand new when I'm fairly confident that the response will be "Thanks for sharing. Click here for the best prices on UGG boots." This is no doubt a failing in me as a writer, but there it is.

So, getting (slooowly) to the point: Wanna come over there and discuss, either in those threads or starting your very own shiny fresh new threads? Huh? Huh? I can't promise that there will be a healthy flowering of discussion and in fact, frankly, I suspect that we'll just end up fleeing from the rising tide of spam. I'm trying to be honest here. But the site does have a fair little bit of traffic, it has very good moderators who would like to see more discussion, and it gets a number of non-spambot posts, even if most of those posts are, yet again, about how to get rich from your blog. So it's the highest-odds possibility, that I know of, for some real blog discussion.

So if you care to wander over, the site in question is the forum at Bloggeries, I'm ChickenFreak over there too, and my new posts are in the Content subforum.  I have plenty of posts in other subforums, too, but (going with that honesty thing again) my other posts there tend to have the mood of an elderly crone threatening the whippersnappers with her cane.