So, a large part of gardening is musing over seed catalogs--and, these days, seed catalog sites. Actually, I sometimes wonder if the actual dirt-and-plants part is just there to serve the catalog part, instead of the other way around. I think I'm joking when I say that. But I'm not sure.

So, the new candidates of the moment (for next year's garden) are: 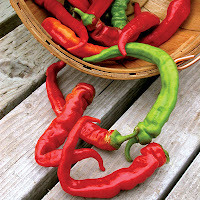 Jimmy Nardello Italian Peppers: I wasn't going to grow peppers next year, but that didn't stop me from paging through the pepper section of the 2015 Baker Creek catalog. These jumped out at me, looking so classically pepper-like that they almost didn't seem real. But  don't like hot...wait, they're not hot peppers. But I won't eat all the fresh...wait, they can be dried. Patient food!

They're frying peppers. I don't really understand the idea of frying peppers (You cut them up and fry them with onions and put them on steak sandwiches, is that it?) but, hey, frying! And they're in the Ark of Food, so they're, well, cool.  Twice-cooked says that they have "an almost-overwhelming fruity sweetness that, when cooked, becomes creamy and complex". Well. Who wouldn't want to grow that? And, even better, apparently Territorial sells them as plants, so if I want to spend extra money, I can save myself the labor and uncertainty of growing them from seed. Well, they sold them as plants this past year--I don't know if they will this coming year.

So I've evicted something--I don't recall what--from the garden plan, to devote one bed to them. Of course, they could be evicted in turn, but I don't think so. 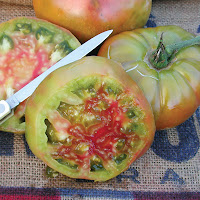 Ananas Noire Tomatoes: Next year's garden plan has four tomato plants. Just four. That's more tomatoes than we need, but which four?  This is complicated by the fact that we like our tomatoes very sweet and very low acid. And that's complicated by the fact that apparently sweet tomatoes aren't sweet due to sugar, but due to flavor aromatics that make them seem sweet. Or some such thing.

That doesn't help us pick a tomato. For years, we've been chasing a holy-grail tomato that a friend once gave us. It was orange, smooth-skinned, round, medium-sized. Last year I tried several orange tomatoes without success; this year I'm going to abandon the quest for that specific tomato and just go for "sweetest."

Ananas Noire sounds good, looks delightfully freakish (that's it in the photo), and it has the advantage of also maybe being available as a plant.

Mountain Magic Tomatoes are/were also available as a plant, and are sort of on the other end of the heirloom-to-modern spectrum. Red, round, smooth, crack-resistant, disease resistant--but apparently low-acid and sweet. Territorial pictures them as dried tomatoes as well, which is an interesting concept just in case we decide to break down and get a food dryer.

Surprisingly, that's just about all. For now.

Edited to note that I have no affiliation with Territorial. It feels weird that I feel obligated to say that a company isn't compensating me to mention them. But when I mention a company in a post, I assume that people will tend to assume that they are. See?