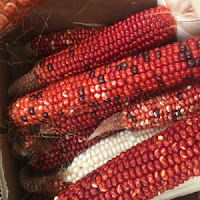 So, dried corn is a pretty patient crop. At least, it was for me this year. I'm working out how to make it even more so next time.

Dig. This can be done at my leisure, as far ahead of planting as I please. No impatience here. And I can prep deeper now that I have the broadfork.

Fertility. Corn should be fed during the growing season, at fairly specific intervals. This year I got away without doing that, but I suspect that the crop suffered--the stalks seemed rather spindly. I got about one ear per plant. I don't know if that's a good crop for this variety or not.

Post-planting fertilization is an issue for the whole farm. I can't lift the weed cloth once a crop is in progress, so I can't add more solid fertilizer. And I'd rather avoid mixing up fish-and-seaweed; having to do so at specific times is an "impatient" requirement. So I need to sit down and do my research on slow-release fertility--rock phosphate and greensand and such. Neither of those take care of nitrogen, though. Is a legume cover crop an option? Does it provide slow-release nitrogen as it decays? Research.

Then there's water. The farm has automated watering, but the corn beds this year were watered with tubing with fairly widely spaced emitters, so there was no guarantee that water would be right on the seeds or seedlings. So I did some hand watering, which is incompatible with the patience thing. The drill-and-mini-soakers would take care of that. Really, I should grit my teeth and trust that the seed will emerge from one good soaking at planting time, but the precisely placed watering will be good for the rest of the season.

Planting? I planted the seed in groups of three, the seeds an inch apart, the groups eighteen inches apart. The idea is to end up with one plant every eighteen-or-so inches. Next time I would plant the seeds more like three inches apart, because by the time I got around to thinning, I was afraid that ripping the losers out of the ground might cause root damage to the winners.

I might also increase the per-plant spacing. That might help with the fertilizer question--the wider the spacing, the more nutrients for each plant to rummage around for.

Then? When the corn was up and thinned, I was pretty much done until harvest.  (Weeding? You might ask. Remember, weed cloth.) I admired the corn patch and was pleased with each stage. Getting tall! Tassels! Ears! Kernels in ears! Kernels turning red! Kernels no longer puncturable with a fingernail! Woo!

Then, harvest. The corn was near dry by the time I harvested it, but the harvest window felt a little tight. If the rainy season had started early, I would have had to harvest still-soft corn pretty quickly and fuss over getting it to dry without molding. A shorter number of days to harvest would be better.

So, next time: Consider a shorter-season corn, prep deeper and plusher with the best slow-release fertilizer scheme I can think of, choose a wider spacing, use mini-soaker drills, plant seeds further apart in their groups (marching along a drill), soak the planted seed and force myself to wait for emergence, and water rarely but deeply.