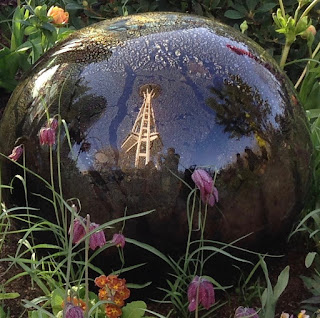 Lamenting:
I should be writing. But I'm not. I am sewing. So I thought I'd write about it.

Blogging Digression:
Now, that makes me think about the fact that my blog doesn't know what it wants to be--perfume, writing, sewing, fashion, gardening, griping, diary, blah blah blah. And that I should really give it a purpose. And there's the other blog, where I haven't written about chicken lately.

But then I flap my hand dismissively at myself and write about the SWAP.

What's With The Section Titles:
I don't know.

The SWAP:
SWAP stands for Sewing With A Plan. Here, I'm talking about the annual SWAP contest run out of a website called Artisan's Square. The general idea is to create a wardrobe of eleven garments, following the rules of the year. This year's rules are here, but as a really quick summary, the structure of this year's SWAP is:

We can include two already-sewn items and one purchased item, so a minimum of eight items have to be sewn. The sewing period started on December 26, and ends on April 30.

Travel Digression:
My goal is a travel wardrobe. Himself likes to travel, and I'm sometimes rather iffy about it, and part of that is what I refer to as the galumphiness of traveling--lumbering along with suitcases and bags and purses and stuff stuff stuff and more stuff.

And also the absence of systems--at home, I know how everything works, but when I travel everything feels impromptu. I've started building systems--for example, I have the "magic bag". It's a little leather toiletry kit bag that contains...hang on, let me find the list...

A toothbrush, tooth pellets, dental floss, folding hairbrush, deodorant wipes, Advil, Aspirin, Excedrin, Zantac, Band-Aids, a hand salve bar, acne wipes, a coverup crayon, a shampoo bar, a lightning cable for my phone and iPad, a charger brick, a barrette for hair restraint while showering, needles and thread, a nail clipper, what we refer to as "chick supplies" for that monthly thing, a pencil, several pairs of disposable earplugs, antiseptic wipes, vitamins, a bottle opener, safety pins, Kleenex, salt, a tiny notebook, stamps, a spork, cough drops, two trash bags, a shaver with some refill blades, emergency cash, a flashlight, a "lunch skin" bag for snacks, and a pair of earbud headphones.

I also found that whenever we're in a hotel room, I miss my slippers. So I got another pair for travel. They take up a non-trivial chunk of space, but I want 'em. They also look like sheep. What more could you want?

There are other things. Maybe I'll write about them in another post.

The SWAP Again:
But turning back to the SWAP, I want a travel wardrobe. I want very, very low-volume garments--the phrase I keep using is that I want a garment that could be "crushed into a teacup!" That may be overoptimistic, especially for the skirts, but it sounds prettier than "crushed into a quart Ziplock!"

A good uniform for traveling would be gored skirt, simple top that hangs outside the skirt to avoid that tucking annoyance, leggings, short flat-heeled boots (tall enough to make the leggings visually indistinguishable from tights), and optionally some sweater/coat/jacket thing.

An issue with this plan is a lack of visual structure--the top pattern that I'm currently fitting is loose and comfy, so I may look as if I have no waist whatsoever. I'll consider the extent of the problem after I get the shirt fitted. Maybe an obi belt?

My summary plan for the SWAP is:

I'm hoping to do the whole thing out of fabrics that I already have. I have plenty of fabric for the skirts--brown and cream wool, brown and cream cotton, gray wool, some creamy yellow stuff,  some oatmeal natural and white stuff, and so on and so on. But it'll take some digging to find fabrics for really lightweight tops that fit the color plan.

OK, this post seems like background for possible future posts, as I find fabrics. And if I don't hit Publish, odds are that it will end up in my extensive heap of unpublished Draft posts.

Image: Mine. No, it has nothing to do with the post. We noticed how the Space Needle reflects into the glassy things in the Chihuly garden, so I took a picture.
Posted by Martha at 9:45 PM