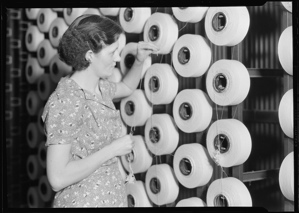 The sewing continues, with limited success. I babble on in mind-numbing detail:

I cut the HotPatterns Classix Nouveau Dolman Blouse, previously discussed and altered within an inch of its life, out of a drapey rayon blend, and made up the main bodice, and pressedpressedpressed the shoulder-and-sleeve seams so that I could see how they draped, and tried on the result. I was delighted--the fitting issues that I saw in crispish muslin went away in the drapey stuff. It looked good. It hung well. I looked like a grownup, rather than my usual persona of a severely aging college student. And it was still comfy.

That was before....The Collar. The notched collar found in the HotPatterns Plain & Simple Princess Shirt is somewhat famous. That is, infamous. There's a long tutorial here, with ten photos, on how to get the bleeping thing to assemble correctly. And a nine-page thread on PatternReview, with even more photos.

The collar on the Dolman Blouse is very similar, and the pattern offers roughly four lines of text, and no diagrams, as guidance for assembly. Unsurprisingly (though of course I was surprised; if I'd seen this coming I would have made a more complete muslin muslin), mine failed, and took the whole "wearable muslin" with it. Ripping out won't help; I was encouraged when _half_ of it went together not too badly, and I trimmed things, thus eliminating any opportunity to restart. While I may eventually master the collar, the only hope for this specific half-made blouse is a recut faced neckline. On PatternReview, I begged for guidance on adding a facing, and when I get that guidance I'll remove the collar, thus stripping even more of the original design out of the pattern. Bwaha.

So. Meanwhile. Grumble. I traced and did a muslin of the Sewing Workshop Cowl Top. It worked surprisingly well without alterations - the main flaw was insufficient material to skim over my hips. Instead of changing the front and back, I instead added a triangular piece of fabric (A gusset? Do I mean gusset?) going down from the underarm seams, and that worked just fine. I have fair to middling hopes that the wearable muslin of this one will actually be wearable. But not enough hope to use silk, even though I bought the silk in my stash so long ago that I have no memory of what it cost. I'll be buying a really cheap piece of something.

Oh, and I started working on a dress pattern, the HotPatterns Wong-Singh-Jones Kimono Wrap Dress. I got as far as doing the bodice and sleeves in muslin, and it failed miserably. The sleeves are almost symmetrical, which is generally held, I believe, to be a bad thing in a set-in sleeve.

Grumble. It's past time for a wearable garment. The Cowl Top had better work, that's all I have to say.

Image: Wikimedia Commons.
Posted by Martha at 12:54 AM