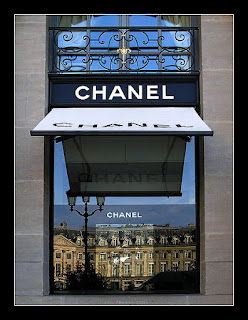 We're spending a few days at a hotel that's two minutes' walk from the downtown Portland Nordstrom's, which has a surprisingly good perfume department. It isn't, sadly, good enough to have many niche fragrances, except for Bond No. 9, and I have Issues with Bond No. 9. So when I drifted through, I spent my time sniffing Chanels.

No. 5 EDT: My main experience with No. 5 is my miniscule gift-set bottle of the parfum, which I perceive as strongly structured, smooth, and glowingly aldehydic for hours. The EDT, in contrast, dried down to something soft, powdery, and a little bit fruity, in less than an hour. I had expected the parfum and the EDT to be essentially the same thing, with different notes emphasized. But no; I'm perceiving them as fundamentally different.

No. 5 Eau Premiere, probably EDT: To my surprise, it's No. 5 Eau Premiere, smelled for the first time yesterday, that I see as a very closely-tied variant of the parfum. It started with a great deal of citrus, a bit more than I altogether approve of, but it dries down to the same firm architecture and glow that I get from the parfum. It still has, to me, a classic "old-lady" vibe, and I approve; nothing with No. 5's name should ever be mistaken for, say, a teen beach scent.

No. 19 Poudre, probably EDT: I love No. 19. (At least, I love the parfum.) I disapprove of flankers. So I was planning on hating this. But I found that I quite liked the top notes; they did have a family resemblance to No. 19, without doing anything to make me use the word "travesty". As it developed, it was oddly variable from sniff to sniff. Sometimes it had a good streak of green in the powder, making it a green comfort scent that I could like. Sometimes it was all retiring powdery boredom. I don't love it, but if I pretend that it doesn't carry the No. 19 name, I like its greener moments.

No. 22 EDT: Nordstrom's had Les Exclusifs testers! They told me that actually buying a bottle required a special order, but all the same, what are the odds of finding the testers? So I tried No. 22. (Why only one? All other sampling skin was already covered, that's why.) It wasn't at all what I expected--based on Luca Turin's review (I love his review of this one), I expected it to be sweet. It's not sweet, and I'm not getting the incense, and I'm not getting the white flowers. All I seem to be getting is a note that I perceive as one of the background notes in Chanel No. 5 parfum. This is a puzzlement; I'll need to try it again, with a nose not recently contaminated by any other perfume.

The dangerous result of this experiment is that I now plan to buy a .25 oz No. 5 parfum, and a 1 oz No. 5 EDT, in the not too distant future. I've mentioned my fear that I'll learn to love No. 5 after it's been reformulated out of existence; now that I am growing fond of it, I'm feeling all the more urgent.