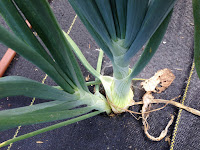 We're entering the time when the garden starts to push everything else out of the blog. I'm late; this year, I abandoned the fall and winter and early spring garden and am starting with late spring. My main rule this year is going to be, "If in doubt, plant more bush beans." It's all all all about the bush beans.

So I just ordered the preferred variety--Blue Lake Bush--from three different sources. I also ordered Fortex pole and Jade bush, and plan to get some Blue Lake pole, and I still have some other bush and pole bean seeds from last year.

My other new garden rule is that I prep garden space for crops by crop priority, rather than by order of planting. So the first priority is to prepare nine four foot by six foot beds for bush beans, ready to the point that all I have to do is poke seeds into the ground--when planting time rolls around. Three of the beds are ready, and most of the rest are still in decent shape from last year. I should be able to just stir in some fertilizer with the electric tiller--half an afternoon's work. I just have to wait for the soil to be the right balance of not-wet-not-dry, and recruit someone to be ready to call 911 in case I cut my foot off.

The next priority is to similarly prepare space for...four? Six? pumpkin plants, again ready to poke the seeds in the ground. That will be more work--the ground hasn't really been broken for a couple of years, though it has been covered in landscape fabric. Though maybe it won't be that much work, because I may just dig out a bucket or so's worth of soil and then cheat by sprinkling fertilizer over the rest of the space.

Then I'll prep even more bean beds. I may pound some stakes into some of them for pole beans. Or I may let some pole beans sprawl around on the ground. I think that Steve Solomon (author of, among other things, Gardening When it Counts, and Growing Vegetables West of the Cascades) said you can do that. Though I may be remembering wrong.

Then I may or may not get around to prepping space for some Sunshine F1 squash. Carol Deppe (author of, among other things, Breed Your Own Vegetable Varieties and The Resilient Gardener) says that it grows good squash even when grown poorly. "Grown poorly" is mostly how I grow squash.  She says that Sunshine F1, when harvested immature, are very good for slicing and drying. We don't actually have a food dehydrator, but we have a smoker oven that maintains a similar slow, steady heat, and that might be worth experimenting with.

She says that Costata Romanesco zucchini--which are normally harvested immature--are also good for slicing and drying. I was going to grow those, too, but I realized that those are useless if I let them get out of hand and mature, while the Sunshine are no problem at all, because maturing is their usual job. And I'd get some squash blossoms for frying from the Sunshines, too.

So I guess my third rule for the garden this year is to grow plants that grow their way to a distant and flexible harvest date, rather than ones that are a waste if I don't get to them this week. Well, except for the snap beans.

I do intend to cheat and plant some potatoes in the two existing usually-lettuce-beds, even though potatoes are a quite low priority.  I may do that as soon as next week.  Then I might till two more lettuce-style beds for more when I'm tilling the beans. This is entirely breaking the "first priority first" rule. But I've been wanting to grow potatoes. And they fulfill the "distant and flexible harvest date." So I'm cheating.

So, beans, more beans, squash, more squash, potatoes.  Far fewer crops than I usually flail around with, and only the beans have to be harvested in a timely manner. Are there any beans that are high-quality snap beans AND high-quality dry beans? Then if I let a bush get out of hand, I could just let it sit there and mature its beans.

I'm skipping lettuce because too much of it goes uneaten--oddly, even though we eat more salads than we ever did. We buy those prewashed salad greens. Maybe next year that will change. I skipped the usual Copra onions because I could tell that I wasn't going to get bean space prepped in time for beans if I took the time to prep onion space in time for onions, and beans were a higher priority.

If the beans, beans, squash, squash, and potatoes get planted in time, I may have spare time for frivolities. Zinnias, sunflowers, and maybe more, late, potatoes. Or I could start some overwintering onions from seed and have a winter garden this year. Or I could put in some more perennials. I enjoy the presence of the perennials--this year we'll have several kinds of herbs, strawberries, currants, and possibly artichokes (there's a volunteer plant), without extra work. Well, without much extra work; I should really fertilize the strawberry beds.

I'm torn about cucumbers. I love Armenian cucumbers, but they produce too many fruits. On the other hand, they seem to just keep on producing, no matter how many giant cucumber-goardy things are on the ground, so why not? I can just toss the giant ones in the city green bin once in a while.