POTD: Snacks. And the farm. And stuff. 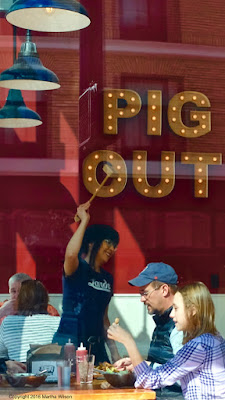 I took the photo at Lardo, in Portland, on Saturday. Fat and fries. Mmmm.

I took it with a rented Fuji X100T, rented for three days because I wanted to know if I like that camera substantially more than my current camera. Not that I'd buy it soon even if I did. I'm figuring I should do this photo thing for at least a year, maybe eighteen months, and put some savings into a Camera Piggy Bank (either real or virtual in the form of an extra bank account) before I buy something like that.

I like the Fuji, but there is no lemming for it yet.  It looks really cool and retro; good. It gets great reviews; good. The sensor is bigger; good. It's pretty expensive; bad. There is no zoom; bad. Well, the lack of zoom is arguably good, but only in the sense that grated carrots are good--it would enforce discipline that I should learn. I should get used to getting close to my subject and get an instinctive feel for just how close I need to be, but the fact is that I'm not there yet. I may never be there.

The Fuji seems pretty bad for macro (look at me pretending I'm comfortable with the term "macro", when only a few weeks ago I would have said, "little things close up") photography. I read that in some reviews, and we went to the art museum and, among other photographic experiments, tried taking close photos of the netsuke on display, and the Sony did a much better job.  Macro isn't my thing, but until I've been playing with this for a while I don't actually know that it's never going to be my thing. I might be cranky if I buy an expensive camera that's no good at it. (Reminder to self: If I ever get around to that plant breeding thing, I might want good close up photos of flowers and leaves and seeds.) The Sony's capabilities are beyond my skills for a while, so there's no rush to choose a next camera.

This year I'm going to try to photograph the farm--both pure record-keeping photos and some photos that might look good as photos. Maybe.

The below is what much of the farm looks like right now, though the photo was taken around this time last year. In case I haven't clarified, lately, the farm isn't literally a farm--it's a garden of twelve wide rows, each row containing ten beds, each bed four feet by six feet, with two-foot paths between beds. So the beds are six feet wide center to center, but we're only planting four feet of that width--though the plants might reach their roots into the paths. 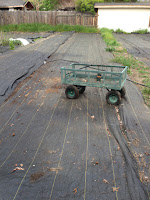 That means (math, math...) 120 X 24, or 2,880, square feet of growing space. We have yet to actually use all of that growing space. Last year we covered much of the farm with high-quality landscape fabric, merrily violating the fabric's warranty by failing to mulch over it. The same landscape fabric used in smaller quantities in the past seemed to hold up quite well across some years without sun protection, so we took the risk. Because weeding more than four thousand square feet of ground--the number goes up from the 2,880 when you include paths and the ten-foot DMZ reserved for eventual shrubs at the back--was never going to happen. Ever.

Ever. Did I mention ever? It took me some failed years of "farm"ing to accept that, but it's accepted now. Even the two lettuce beds in front tend to get out of control.  The fabric makes a huge difference; a few weekends ago I went out to the farm and was able to make a non-trivial dent in the required prep work for the summer garden in one little four-hour afternoon.

I suspect that the next reality-acceptance exercise will be accepting that I won't plant, tend, and harvest anywhere near 2,880 square feet of annual plants every year, even at dryfarm spacing. So we'll be slowly adding more perennials.  Very slowly. We're planning on roses, blueberries, raspberries, possibly asparagus, possibly artichokes, and so on.

I even had brief thoughts of hazelnuts, but after reading about pollinizer trees, it looks like I'd use up more than the entire farm before I planted enough trees to be reasonably confident of a crop. There might be pollinizers in the neighborhood, for all I know, but I'm not going to count on it.

Labels: Gardening, My Photos, Photo Of The Day, Photography, Rambling, The Farm