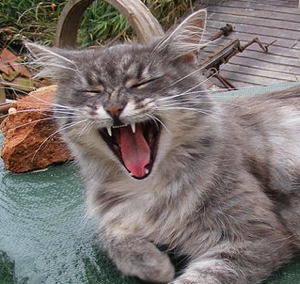 Except first, failing to say Enough is Enough, I eat a chicken finger with onion dip. And eat a Russian tea cookie. (Without onion dip. My dietary transgressions have limits.)

There are a lot of picture-free posts down below. So I added the feline yawn over to the left. Think of the cat as representing my brain. Complete with yawn and fuzz.

I just set up my sewing machine and my serger. I can leave them up for another week and a half until I get back to work. So I might make several of the six-gore skirt mentioned in the previous post. Or I might just sleep a lot. 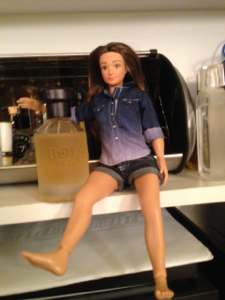 Lammily arrived. The Barbie substitute with human proportions, that Lammily? There she is, relaxing with her shoes off, communing with my favorite Christmas perfume. (Bois 1920 Sushi Imperiale.)  I was going to make her a tiny Santa hat, but I got lazy.  But she does look like she needs some winter clothes. I've been wondering if photocopy-enlarging the little pattern-piece outlines on a pattern envelope might produce a usable pattern.

It does seem a little odd that I want to make doll clothes. I made 'em a lot as a kid for an adventuring Skipper (back when she was flat-chested) who travelled with a dog and an excessively large wardrobe. Lammily reminds me of her. I have a gorgeous piece of corn-yellow silk georgette that I keep imagining making into a doll dress,  even though the lost length would probably make it unusable for a garment for me.

I think that is all.