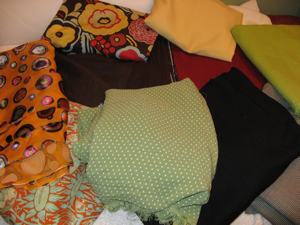 Remember that SWAP (Sewing With A Plan) that I talked about? My plan has changed. Completely. Well, fairly completely.

The previous plan specified black for everything but the shirts and blouses, and bright saturated colors for long-sleeved and fairly wintery shirts and blouses. Almost all of the candidate fabrics were "fancy"--washable, but washed separately and nervously in the Wool or Delicate cycle, rather than being flung with their similarly-colored companions into the Normal cycle.

But I noticed that there's not much winter left, at least in sewing terms. And accepted that while I can wear a silk blouse around the house (as long as I put on a cooking coat before I fry anything) and out to lunch on a cool day, silk is a little much in the garden and not very comfortable on a sweaty day. And, perhaps most importantly, we already have a lot of wash-seperately garments (aka "freak laundry") and Himself might rebel if the "Don't wash that!" population gets much bigger.

So the new plan is a warm-weather SWAP. It uses chocolate brown for the neutral, has no wool and no silk and more cotton, and some of the shirts will have short sleeves. It acknowledges that I'm not going to sit down in damp garden dirt in a skirt.  It still has colored tops. That leads me to:
"Exactly the right print" for all those prints would be something with a colored rather than white background, and a definite "mood" to the design--Art Deco, Art Nouveau, Fifties Space Age Housewife, Seventies Flower Child, something more distinctive than just, "Ooh, pretty." (Unless it's such a heartbreakingly beautiful "ooh, pretty" that extra personality is not required.) And it can't be quilting cotton weight, because I look dreadful in the way that quilting cotton hangs; it needs to be lawn or voile or fancy shirting or some other garment-weight fabric with more drape.

I dug out every stash fabric that works with the brown theme, just to look them over, and of course I took a photo. You'll see that my taste for the whacky is growing. In case you're wondering, yes, that stuff to the left is orange chiffon with multicolored velvet polka dots. I'm not yet skilled enough to sew anything with it, with is just as well, because I need to figure out an occasion to wear it--Himself is not going to be willing to be seen with me in the resulting garment.

Most of the blouse fabrics that I've sewn (or only cut) so far this year were chosen for their affinity with black, but I think they'll work fine with brown. Two white shirts--fine. The pinky/red silk top--adequate. The red polka dots and the lime green may work even better with brown than with black. The black linen Liberty Shirt (cut and waiting to be sewn for weeks now) will make for a funereal combination with the dark brown linen skirt, but then again, I was going to wear it with a black skirt, right? Of course, all-black can have a sharp urban look, while black and brown may just signal "blah." We'll see. 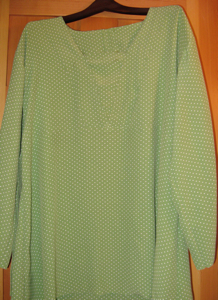 See that green stuff with the polka dots, in the photo above and then sneaking in half-constructed on that hanger to the right? It's a nice drapey rayon crepe. It's not included in the SWAP, because it's neither cotton or a saturated color. I should be hurrying to work on SWAP garments, because I have to finish eleven garments by 30th to finish the SWAP. So, naturally, yesterday I cut and started sewing the green stuff.

I used the  Indygo Junction Over The Top Tunic. I wouldn't have considered this pattern based on the envelope, because it's pictured in quilting cotton. But Fabric of Vision had a sample of it in a dressy drapey fabric, and I saw and fell in love with that before I saw the pattern photos. The pattern still makes me a little nervous, because it has a raised/Empire waist, and I always assume that those will make me look pregnant or at the very least emphasize my non-trivial stomach. This is probably illogical, like any part of the delusion that people will look thinner in too-tight clothes. Why would making room for a bulgy part of the anatomy emphasize it more than stretching fabric around it?

Anyway, I finished it in the green stuff to the point of being able to try it on, and I rather like it. It has a faint Renaissance Fair vibe, the belt makes it curve in and then out in the back in a waistlike manner, the front doesn't billow excessively, and I really like me in the squarish neckline. I learned that the triangular inset in the neckline should be interfaced when using a drapey fabric; I'm debating whether to rip it out and interface it, or quit while it's more or less working and call that a lesson learned for the next time I use this pattern.

I'm also puzzled about the sleeves--I lengthened them from three-quarter length, and they're a little twisted. (Visually twisted; they're perfectly comfortable to wear.) I seem to remember that twisted sleeves are a result of the fact that one's arms are attached toward the front of the body but patterns are often drafted on the assumption that they're precisely on the side. Something like that. Or, of course, I may have eased the sleeve in a bit wrong. I think that the three-quarter sleeve in quilting cotton would have enough stiffness to allow it to correct itself, but the long sleeve and drapey crepe are causing the sleeve to hang up on my arm and look twisty. I don't have the faintest idea how to fix this, so I'm trying to ignore it.

While I made this as a blouse, it's more often pictured as an overshirt, without the neckline inset and with a tee or other shirt underneath. I don't actually own anything in the overshirt category--when I want to add a layer, I tend to just put a T-shirt on under an another T-shirt, or a sweater and then another sweater. Function, not fashion. Now I'm thinking of making this up in something warm... ooh!

I have a length of red wool that I bought when I thought (for a dangerous at-the-computer-with-a-credit-card-nearby moment) that I would wear a red skirt. I won't wear a red skirt. I already own a red skirt. I've owned it for fifteen years. I wore it once near Christmas. But I would certainly wear a red wool overshirt tunic thingie. I'll probably line it with China silk to test my theory that less friction would ease the twisty sleeves, thus making it red and wool and silk.