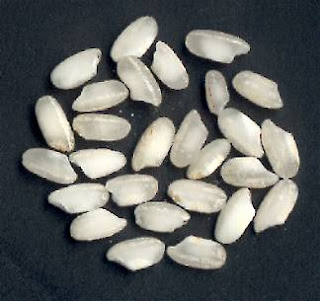 So the lack of perfuming continues. And so does the lack of blogging. But I'm doing other things, so why not write about them?

For example, we learned to make risotto. Now that I have learned it, that sounds like an embarrassingly minor achievement, because it was easy. Really easy. Grate some cheese, chop and fry an onion, warm up some broth, measure some rice, stir until your arm gets tired, eat. We started with a very mildly-flavored and elegant white risotto recipe from Marcella Hazen, but we reconfirmed that "elegant" is not our food taste. I ended up doctoring it up with double butter, double Parmesan, and double salt, and then I was content. And fatter.

Next? Panko Crusted Cheesy Risotto Balls. Make risotto, stir in an insane amount of cheese, stash it in the fridge. Next day, mold it into balls, crust it with flour and egg and panko crumbs, and deep fry. Now that's risotto! Though if deep frying seems a little too wrong, the fresh hot cheesy risotto is mighty good, too. I had to stop myself from eating it all before sending it to the fridge. Next time I'm going to put in some Rogue Creamery Chipotle Cheddar for a little more kick.

We served said cheesy risotto balls at a Memorial Day party for twenty-six people. Some of whom stayed to watch Mr. Blandings Builds His Dream House. I continue to boggle at the fact that we entertain.

And then there's the gardening. I've been raising seedlings, unusual for me. And thinking about attempting plant breeding experiments, though I'm choosing plant edibles that are already fairly rarely eaten--radish seed pods, sunflower buds, and (not as unusual) squash blossoms. That way, I can spend my first breeding year just eating what already exists.  And as long as I'm looking at growing oddities, I'm considering things like parch corn and pop beans, both of them dried seeds that partially "pop". (Anybody remember the parch corn in Caddie Woodlawn? I always wanted to try some.)

And we hung some pictures. This doesn't sound like a big deal, but it's something that my parents didn't do, so it feels like an accomplishment. My den now has the Cock-A-Doodle Mosaic by Gardener Artist on one wall and a silly photograph of a favorite formerly-local actress on another.  Yay.