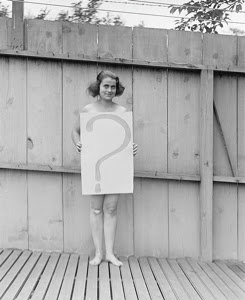 What's the deal? Why aren't I blogging? What? What?

Maybe it's that no-new-perfume-until-August thing.

Maybe I need a nap.

Maybe it's too much caffeine.

Maybe my brain was stolen by aliens.

Maybe it's a Communist Plot.

Maybe I sent my brain out for cleaning and forgot to pick it up.

Maybe I never wrote all those posts and they were all a delusion.

Maybe it's not possible to garden and blog in the same week.

Maybe I really am posting but then it's wiped from my memory, like those critters on Doctor Who.

Maybe the earth is flat.

Maybe all chicken was replaced by Soylent Green.

Image: Wikimedia Commons.
Posted by Martha at 12:17 AM