Writing: NaNoWriMo or no NaNoWriMo? 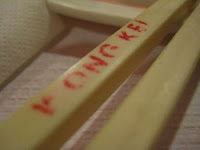 I could work on the novel that just got darker. I've already started on it, but I'm usually a NaNoWriMo rebel anyway.

I could do the "NaNoBlogMo" thing where I try to blog fifty thousand words. Not fiction. Babbling.

I could just ignore the whole thing.

I could just set some other goal, like writing or blogging every day, but not the 1667 words that NaNoWriMo calls for.

It occurs to me that the purpose of NaNoWriMo--at least as I interpret it--is to encourage one to write willy-nilly, without worrying about any discipline other than pumping those words out. It's a goal that I approve of, for those who are inclined to perfectionism and won't call a piece of writing finished until it's polished to a high gloss.

That is not my problem.

So I could reverse the whole thing and try to force myself to write something coherent and somewhat polished, every day for a month. Not long and coherent and polished; there's a limit to the madness here. But something that isn't diary-like and isn't dependent on the context of the blog. My history with Girl Scout Thin Mints one day, thoughts about Kamandi, The Last Boy On Earth the next, that kind of thing.

The odds of that happening are low. But I kind of like it.  It could be a plan for a very ambitious NaNoWriMo Rebel whatsit next year, if I pre-planned thirty topics. But I don't see it happening this year.

See, the above is only 240 words. Can I really write seven times that much every day for a month? It feels iffy.

I could just write free-association fiction:

Janet collapsed on the beanbag chair and stared up at the ceiling. Acoustic tiles. She started to count them, first across, then down, but lost track twice. How was that possible, after only two glasses of wine? Maybe they... ah. The doorbell.

"Chinese food is here!" she shouted. " Can you get the door? I've fallen in the beanbag and I can't get up."

Image: By Extraordinary. Wikimedia Commons.
Posted by Martha at 12:44 AM