Budget Of a Dozen Change Purses 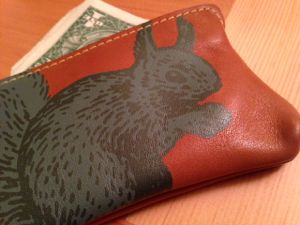 I owe the squirrel four dollars.

I had to type that. Because I could.

See, I'm playing budgeting games. Part of the plan is to give myself a monthly allowance of pocket money, in cash, so that every casual penny I spend feels real. I can't spend cash online, of course, so when I spend money online or use a credit card I move the same amount of cash out of my wallet and into a little leather change purse decorated with a squirrel. Isn't he cute? The squirrel money, of course, belongs to the bank account that will eventually pay the credit card. Since the bank account also produces the pocket money, it will just be the starting point of next month's supply. Whee!

Then there's jellybean money. No, I don't have a purse decorated with jelly beans; the jellybean purse is decorated with odd little rolling hills.  The term comes from a Dagwood comic strip in which Dagwood came home with his paycheck and handed out the allowances and the grocery money and filled the envelopes for all the bills, and had enough left for a bag of jelly beans for himself.

So it's for fun things. I won't be buying jelly beans. I'll be buying perfume. Among other things.

Jellybean money is an older convention for me than the pocket money or the squirrel. It comes from a variety of sources, mostly unexpected modest windfalls. ("I never cashed that check from selling my bike at the bike sale two years ago? You're sending me a new one? Cool!") And gifts. Larger windfalls (tax refunds, say, or if I had the type of employer inclined to give bonuses) mostly go into savings or proper un-jellybean expenses, but I tend to kick a percentage into jellybean money. And now any leftover monthly pocket money will also go in the jellybean purse.

Jellybean money is like a little prison with flexible walls--if it's too small I'll just burst out of it and spend regular money on fun expenses; if it's too big it negates the goal of saving more. All my jellybean funds are in cash, because, again, cash feels real. I rather doubt that I'll save enough to get to a "wow, that's a lot of cash to keep in the house" situation. There are too many perfumes out there. And scarves. And books. And fabric. And patterns.

This is, yes, one of those diary-like posts where I babble about things that have no particular use to the reader. It also gives me a post to link to when I say things like, "...I spent half the jellybean money..."

An added budget rule is that I'm only allowed to spend jellybean money on Last Saturday. (See? Linking!) Otherwise, it will always be there to rescue me from mismanagement of pocket money.

I was thinking of requiring that jellybean funds follow a rule that I've occasionally seen for children's allowances--a rule where they have to save a certain percentage of their allowances and then spend that saved money only on purchases above a certain value. I think that the idea is to ensure that they get the experience of saving up, rather than spending their entire childhood frittering every dime on candy the instant they get their hands on it. But, really, how many little frittering purchases can I make in one day a month? I'll think this one over.

Of course, today is last Saturday, so any new rules will be applied next month. I already bought three short cuts of gaudy silk that I hope to successfully make into scarves with the serger. We'll see how that goes. 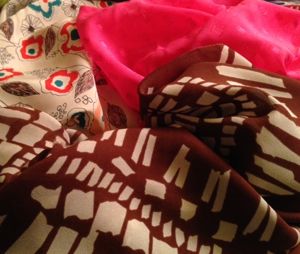