Rambling: Fat and Bones and Heels 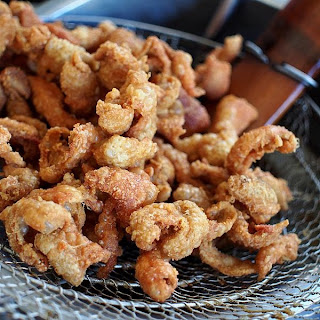 It's been three weeks since I last posted. That means that it's time for one of those "write something!" posts.

I really should have had something to say, because we went to Feast in Portland. And ate things. Many things. At Feast and at restaurants.

Marrow bones at Little Bird. Deep-fried fish bones at Raven & Rose. Roasted goat neck from the girl of The Girl and The Goat, guest-cooking at Nostrana. A lot of cupcakes from St. Cupcake. A magnificent sandwich from Expatriate. General food glory from Beast. Thin-sliced fried okra from Bollywood Cafe. And more and more. "Mint leaves with sea urchins meringues" (!) ice cream from Salt & Straw. Khao Man Gai and fried chicken skin from Nong's. Why didn't anyone tell me that they sell fried chicken skin? I really need to read menu boards more carefully.

It was worth it.

I also tried to  pursue that Fashion Thing, with less success, in part because of that fatness factor. Preestablished fatness, not the newly acquired padding. I was hoping that Portland would offer more clothing choices for the pudgy, but without much luck. I did get a bra fitting, having been convinced of the value of doing so by watching all those What Not to Wear episodes, and bought some bras that, well, fit. And stocked up on hose and tights. At Avalon Antiques I bought a vintage brooch that looks rather like Cthulhu if he'd gone on a supermodel sort of diet.

And I wore heels to brunch. Girl clothes. That was interesting.

Image: Wikimedia Commons
Posted by Martha at 12:10 AM