Rambling: The Greek Food Festival Effect. And getting motivated for the Autumn 6PAC 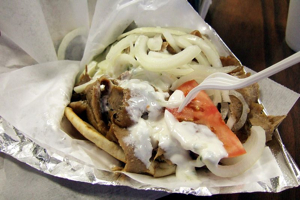 So, have I ever mentioned the Greek Food Festival Effect on this blog? See, long, long ago, Himself and I went to school in Pittsburgh, and every year a Greek food festival was held nearby. Every year we planned to go--unambigious, firm, gonna-go-eat-dolmas plans. Every year, for one reason or another, we didn't or couldn't go. After enough repetitions, we finally decided that there was some cosmic force at work, preventing us from going. The logical conclusion was that if we ever did go to a Greek food festival, something extraordinarily bad would happen. By preventing us, the universe was just protecting itself.

Other events, such as the Backstage Tour at the Oregon Shakespeare Festival, have achieved Greek Food Festival Effect status--for perhaps fifteen years, we intended to go, and never did. I'm tempted to request tickets one last time and show up eating a gyro, just out of sheer contrariness.

My point? My point is that I'd better do the Stitcher's Guild Autumn 6PAC this year. Stitcher's Guild is a sewing website and forum. It has a seasonal group sewing event called the 6PAC. It stood, originally, for "six piece autumn collection" (I think), but as I understand it, the acronym had so much appeal that it's used for all the other seasons, too. The idea is to sew six garments for the upcoming season, the garments and colors chosen based on specific guidelines.

I planned to participate in the 2012 Spring 6PAC. And the Summer one. And the 2012 SWAP (Sewing With A Plan, a larger sewalong). I seem to recall halfheartedly planning to do past SWAPs, maybe 2007, 2008, something like that. I bought some fabric. I puttered with some patterns. I never did any of them. See the GFFE building up here?

This year's rules call for the creation of a top, bottom, and jacket in one neutral color, plus another top and jacket in a second color that can be neutral or not, plus one more top in a print containing both colors. A "bottom" in this context is skirt or pants or shorts or kilt or whatever. A jacket is a jacket or a cardigan or overshirt; I don't know if a coat or vest would qualify, though I suspect that if I read the rules more carefully, that question would be answered.

The idea is that all of these garments will go together. The overarching idea is that you will actually wear them. Now, you'd think that that would be a given, when sewing clothes, right? Not so much.

For example, in my fabric stash I have a piece of burnout velvet with an orange chiffon'y background and big, roughly 3-centimeter dots made up of concentric circles of dark purple, violet, orange, lime green, and yellow. This piece of fabric excites me more than any other item in my stash. I'm imagining making it up in an angled long-jackety shape and dressing up as a Laugh-In witch at Halloween.

Then there's the bright amethyst purple silk charmeuse. I bought that to make pipings for whatever I make out of the piece of lime-green-and-purple silk brocade that's on the other side of the shelf. If there's enough left, I could add piping to the orange polkadot chiffon.

You begin to see the problem? Now, not all sewers create unwearably gaudy garments--some create unwearably elegant or dressy garments. Some craft fine couture confections in delicate all-natural materials, wear them once, and leave them in the "dry clean/hand wash" bag for a year. Some make garments that look just dandy to everyone else's eye, but the sewer sees them as having that homemade look and never wear them out of the house.

A sewalong that requires me to sew sensible, wearable garments would be a good exercise. I'm trying to use only patterns that I've already fitted and worn, and use as much fabric from my stash as possible. And I'm trying not to think of all of this as the hobby equivalent of eating nice healthy raw broccoli. I'll be delighted with the garments when they're done--they'll be girl clothes that fit me. It's just the actual sewing that will feel uncomfortably sensible.

Image: By StephanieD. From Wikimedia Commons.
Posted by Martha at 10:12 AM